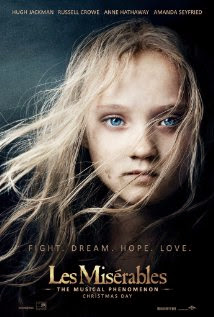 This past weekend I had the opportunity of seeing the Broadway  musical, 'Les Miserables'  In fact I saw it twice.  Each time the words became more meaningful, and the story line became more clearer. It's a true story of love, hope, compassion and redemption.  This was a wonderful event to celebrate our family's birthdays.

"Jean Valjean, known as Prisoner 24601, is released from prison and breaks parole to create a new life for himself while evading the grip of the persistent Inspector Javert. Set in post-revolutionary France, the story reaches resolution against the background of the June Rebellion.
Based on the novel by Victor Hugo, 'Les Miserables' travels with prisoner-on-parole, 24601, Jean Valjean, as he runs from the ruthless Inspector Javert on a journey beyond the barricades, at the center of the June Rebellion. Meanwhile, the life of a working class girl with a child is at turning point as she turns to prostitution to pay money to the evil innkeeper and his wife who look after her child, Cosette. Valjean promises to take care of the child, eventually leads to a love triangle between Cosette, Marius who is a student of the rebellion, and Eponine, a girl of the streets. The people sing of their anger and Enjolras leads the students to fight upon the barricades."

A highlight for me was the song, 'Bring Him Home'  Truly a song which represents the deep love of a father for his daughter and future son.  He was singing this song in hopes that his daughter's lover, Marius would be spared of his life in the revolution so that he could 'come home' and marry his daughter, Cosette.  A most moving experience.

While Valjean’s efforts on behalf of others inevitably cause him problems, they also give him a sense of happiness and fulfillment that he has never before felt. Valjean’s love for others—in particular, for Cosette—is what keeps him going in desperate times.

He's like the son I might have known
If God had granted me a son.
The summers die
One by one
How soon they fly
On and on
And I am old
And will be gone.

If you love musicals, this is a must.
A musical drama filled with action, hope, dreams, compassion and love.