What do Mennonite Men Do at a Book Launch? 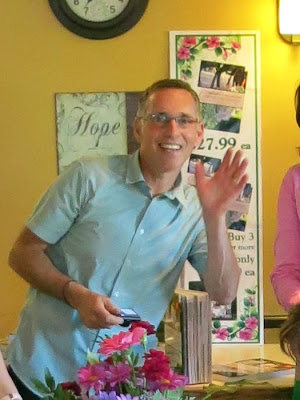 Terry, (Lovella) was there to greet us all at 'House of James.'
As you all know...not only the women came together for the book launch,
but the husbands were also included.
Welcome John (Betty) and Tony (Char) from Manitoba.
Regrets to Greg, Ellen's husband who was on a work project in New York. 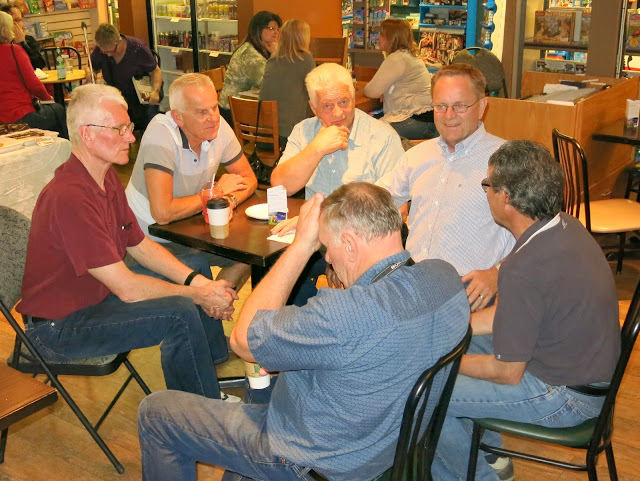 The men met at House of James the first nigh.
As you can see...there were some frustrations.
Somehow it seemed like Lovella had the women well organized,
but forgot about the men.
I'm not sure who was delegated to take on this task, or who would want to. 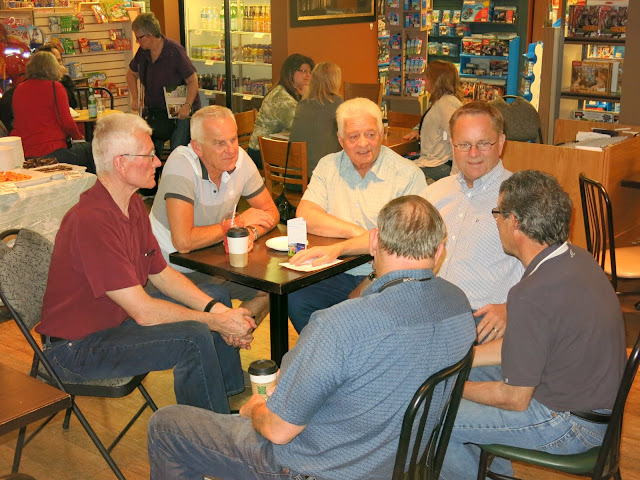 Some how none of these men seemed to know what was happening.
My husband had asked me all week what was going on.
I told him.....
He forgot.
I repeated myself how many times?
I finally printed off a schedule for him.
"Don't ask me once more."
(Somehow this conversation was held in more than one household)

So finally when they came together....here was John (Marg) with his cheat chart.
He seemed to know the weekend's plan.
Now the menfolk were wondering, especially Terry,
why he did not have a printed agenda.
Well, you can imagine how many times they compared notes.
Anyways it didn't take long and the men organized themselves. 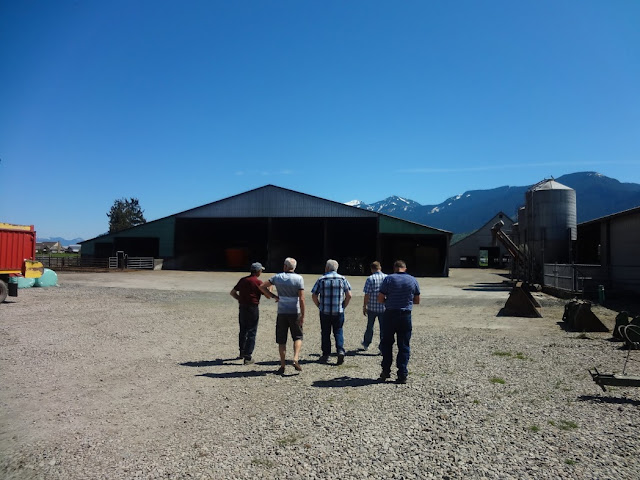 They met Elmer (Judy) at his dairy farm, Rosevale Farms, nestled in the Fraser Valley. 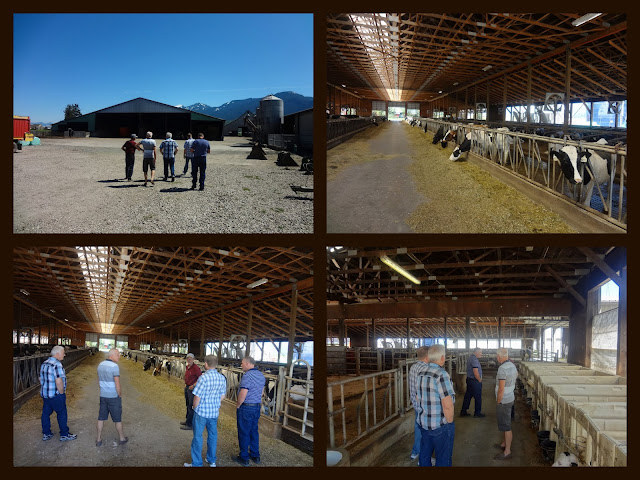 He gave them a tour of his new drive through operation,  showed them their calving operation, 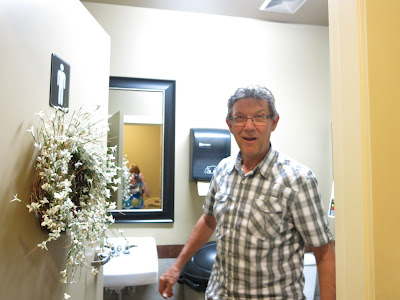 and his newly renovated farm bathroom? 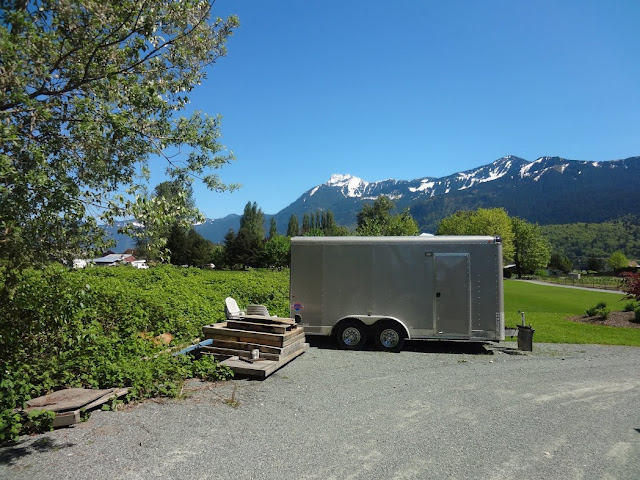 Then off to Harv's (Bev) business, Klassen Specialty Hydraulics,
which is nestled in Rosedale between the mountains. 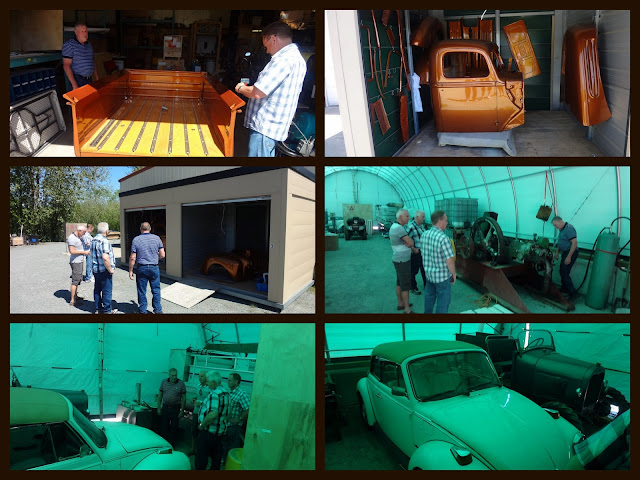 I'm still wondering which truck it was that reached top speeds of 140 mph,
in a limited speed zone?

Look closely, you can see the men viewing there phones,
messaging, texting, and emailing. 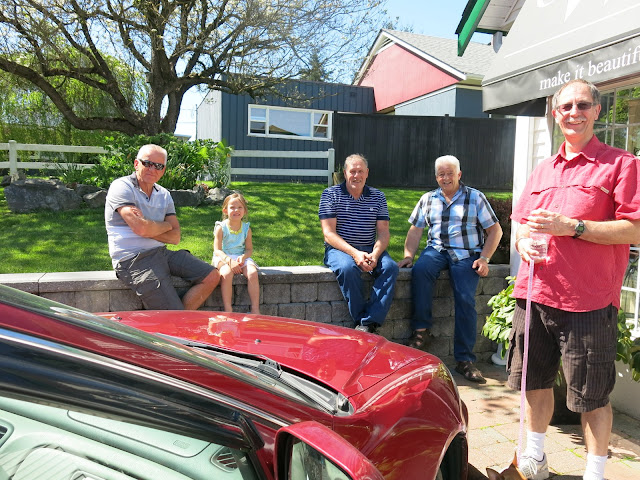 It was time to go to Winks!
Some sat outside and listened to Julene, Herb's daughter serenade them with her violin. 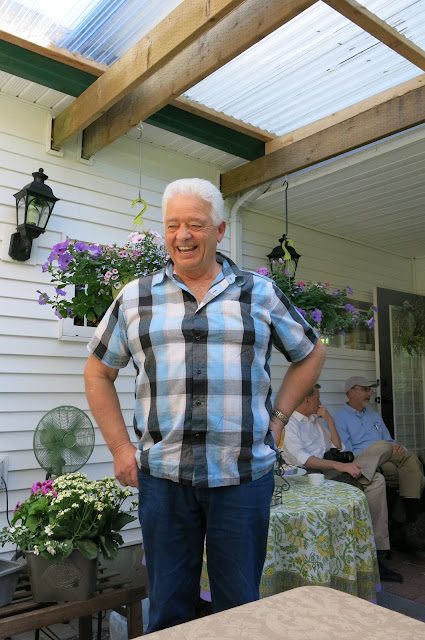 Others were delighted to step right on inside where the action was happening. 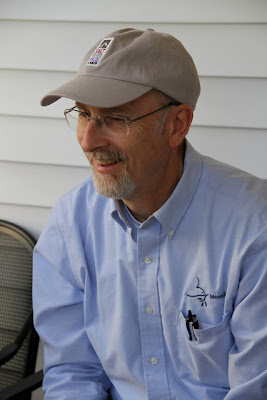 Russ Eanes, the executive director from Menno Media
was comfortably taking it all in. 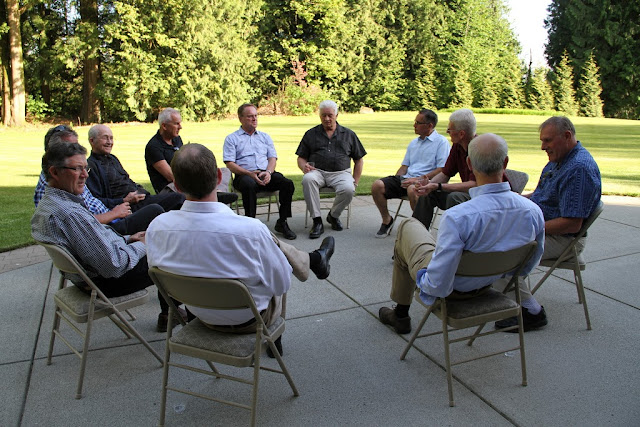 In the evening we were all delighted to be served prime rib dinner
at Sweet Dreams Bed & Breakfast.
What man would miss that kind of meal?
As you can see, they too, could sit quietly and visit, but not for long. 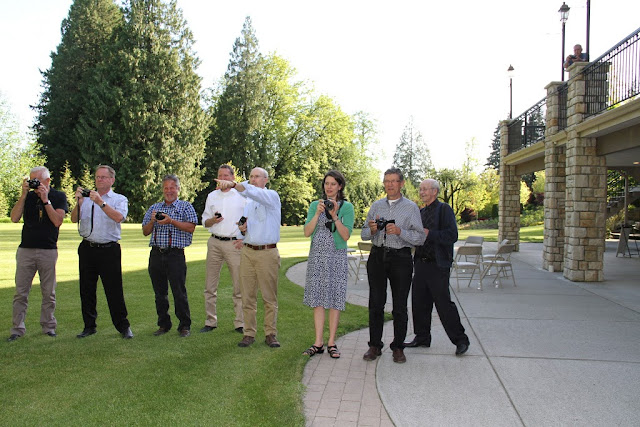 Most of  these men have learned how to use their wives point and shoot.
They certainly had their own agenda of how to pose for the photo shots. 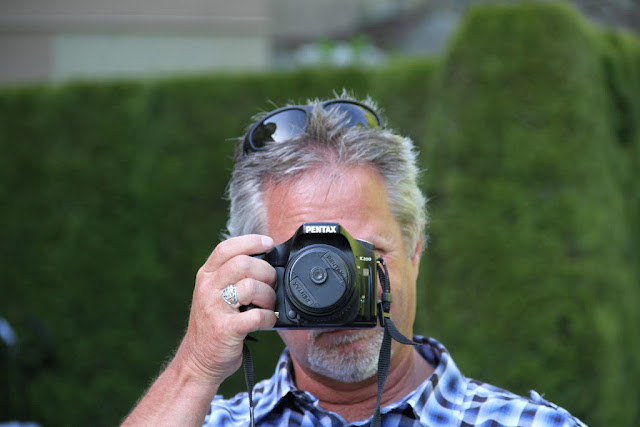 In our midst we had one sharp shooter.
He never missed a cue. Here's a few men poking their heads inside the window,
hoping to catch score of the Canucks, which was hopeless in the end. 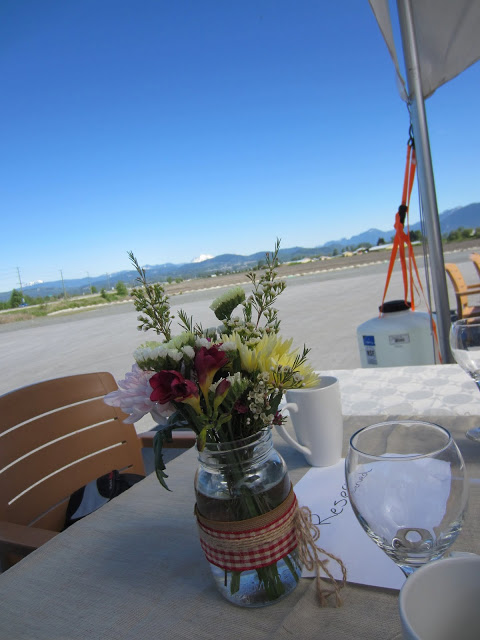 Sunday morning, we found ourselves blessed with another sunny blue sky.
They were off to Lepp Farms. 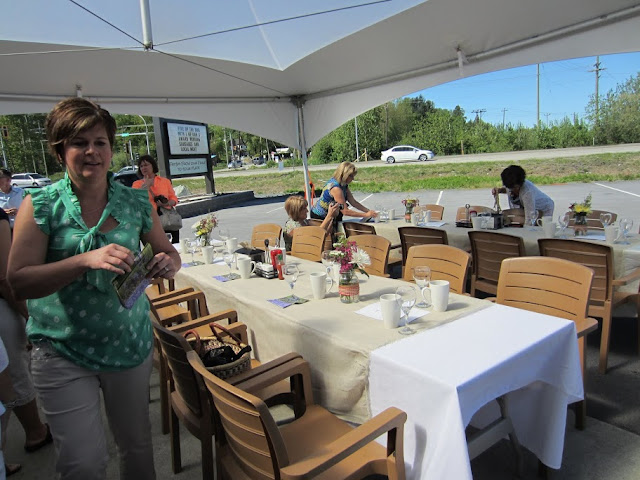 Charlotte was there to make sure the brunch had stacks of bacon,
extra thick and crunchy for these men.
Later her husband Rob, took the men on a tour of his market. 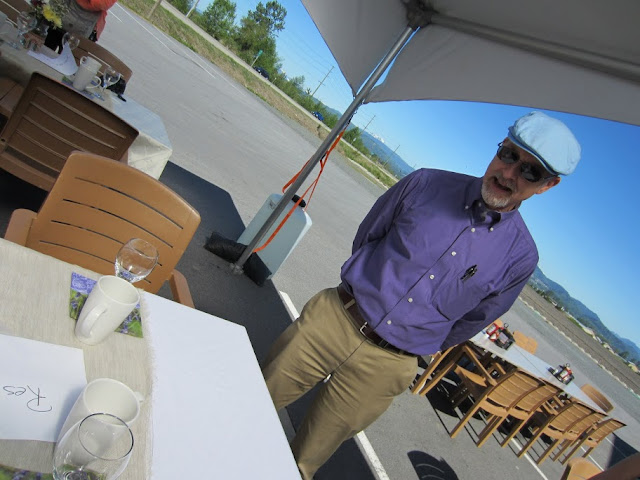 Once again, you can see our director, Russ examining the brunch set up. 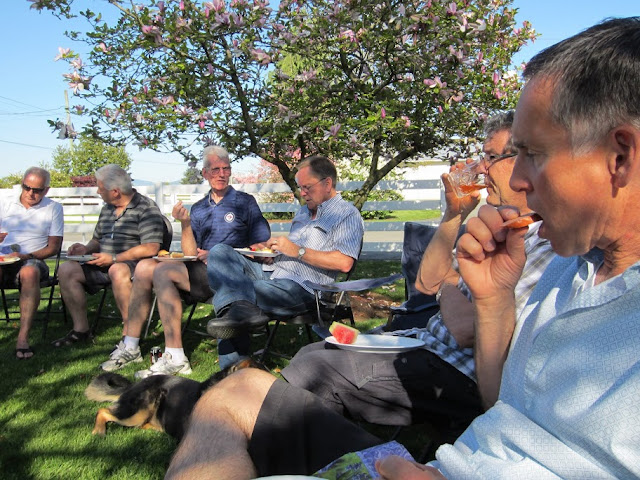 After a game of Bocci Ball, the men finally sat down and enjoyed some Faspa.
Notice how they always group together? 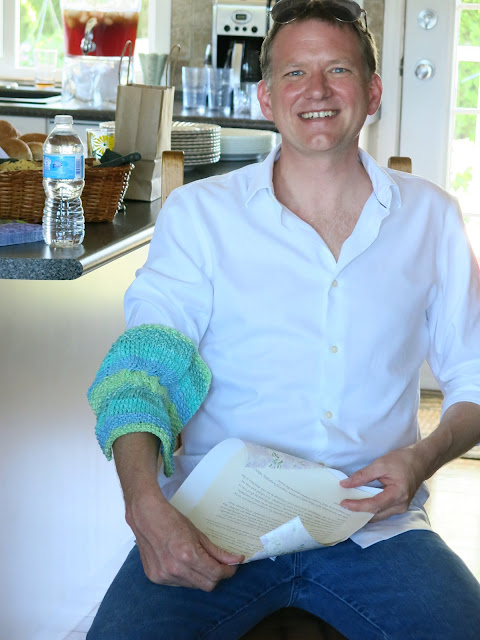 Except for Ben Penner, Director of Marketing and Sales, who was observing the women inside...
sticking to his job, keeping the women out of trouble and organized. 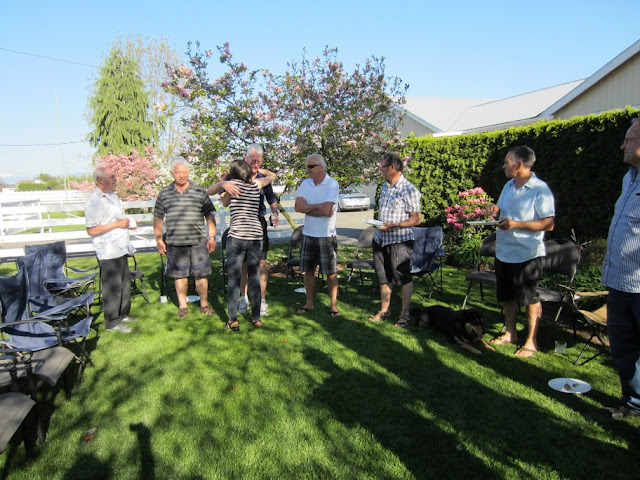 And at last, all good things had to come to an end...
The men stood up as our editor, Amy Gingerich had to catch a flight.
And soon the hugs began as they  all said 'Good bye'

Thank you men for joining your wives.
We all had a wonderful time.