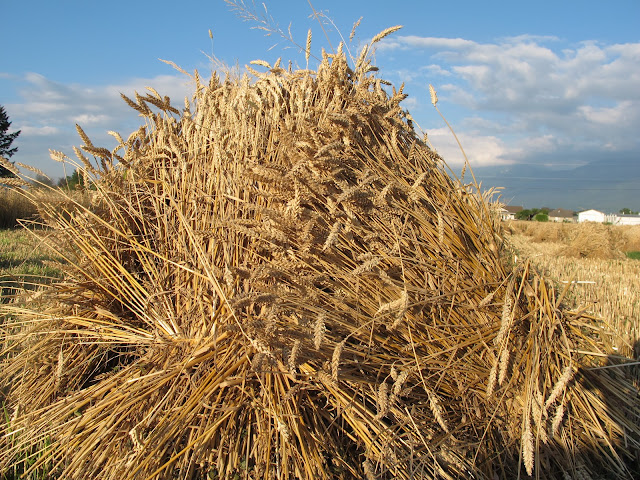 Who says the you can't grow wheat in Chilliwack?
History is being made all over again!
Now, we know why the traffic has come to a stand still as cars/trucks slowly rolled by. 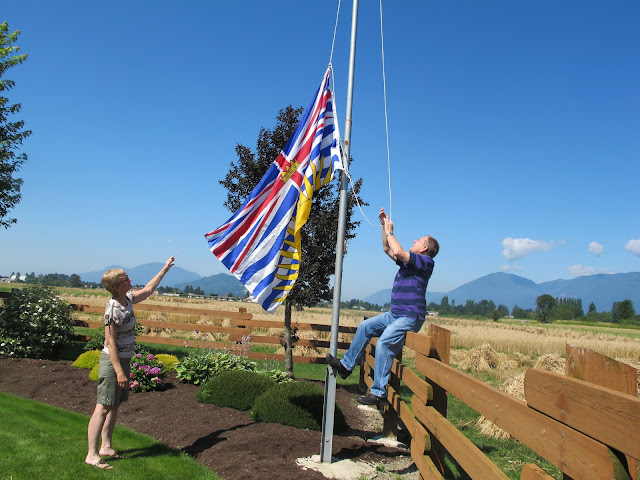 Meanwhile,  it's BC Day, another statutory holiday which gives British Colombians another day
to celebrate their achievements and relax with family and friends.
Here's Cousin Gerri helping hoist up the flag. 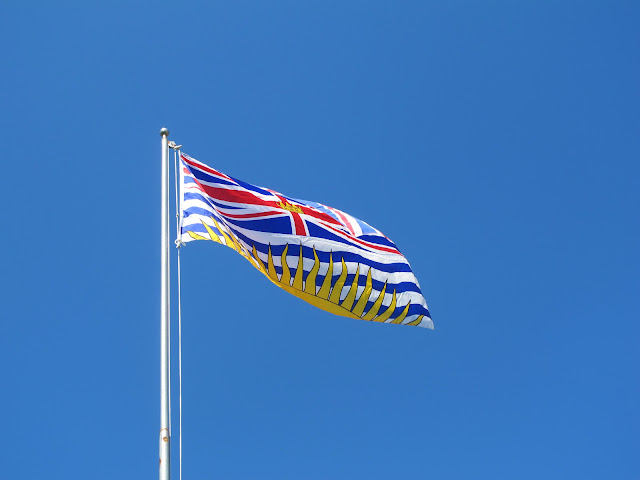 The top part of the flag consists of a union flag with a crown in the center. The lower part of the flag consists of a setting sun on a background of blue and white waves. The British Columbia Day Act was first introduced to the Legislative Assembly in 1974. The aim of the Bill was to create a statutory holiday on the first Monday in August to recognize the pioneers in the province. 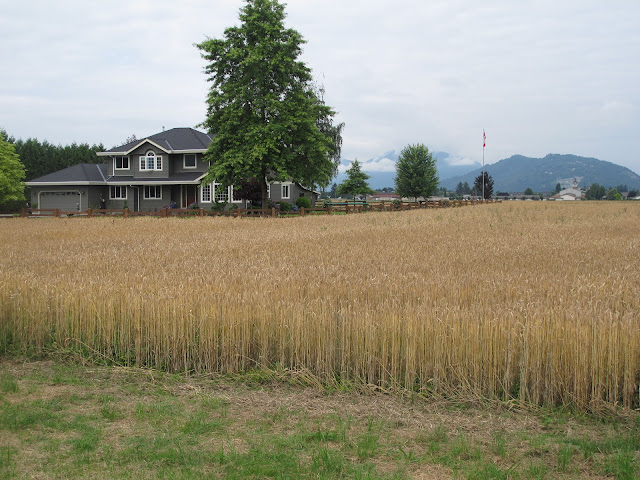 Speaking of pioneers, we've had quite an exciting summer. As you drive down the road, you will notice wafts of golden colored wheat, blowing in the wind, waiting to be harvested.  Winter wheat was planted as a cover crop during the fall season and because of our unusual weather, this field was not planted according to schedule. No Chilliwack Corn from this plot. 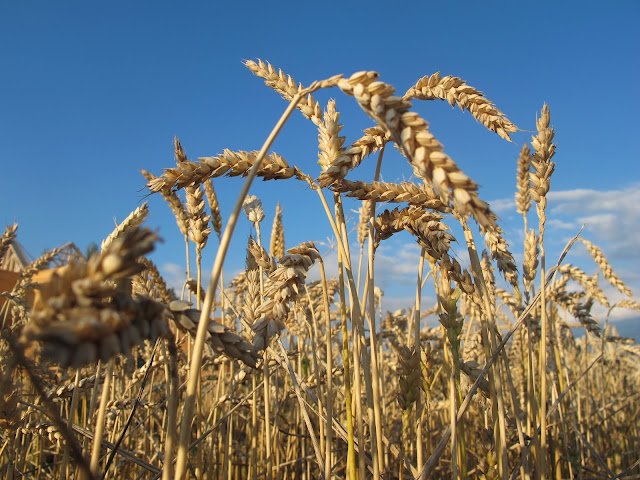 A growing demand of interest increased as the field of wheat began to ripen. 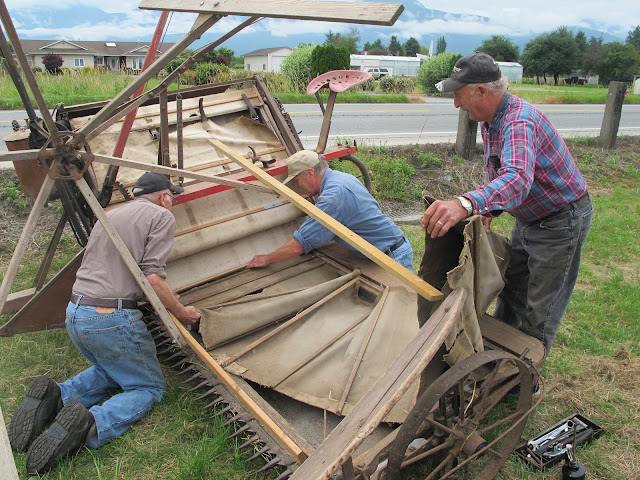 Last week a group of men from the Atchelitz Threshermen's Association came out to inspect and assess the wheat for dryness.This group loves to give the residents of Chilliwack a chance to see how farm machinery might have worked in the past. They carefully assembled the 1920 McCormick Deering binder and gave it a trial test. 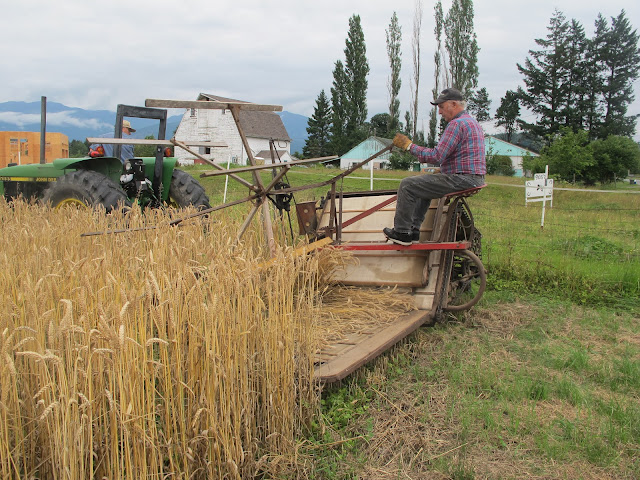 In the earlier  days this same binder was drawn by horses, rather than a John Deere. This is a first for us as we watch with awe, how they cut the wheat, and how this antique machine binds the sheaves together. 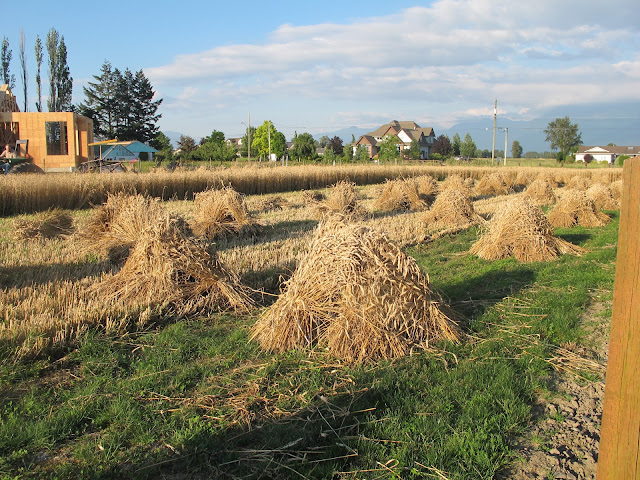 A  sheaf is a large bundle of unthreshed wheat which is bound together by straw or string, and then later all the sheaves are set up-right in the field with their heads together creating a stook. This protects them from any moisture. And who picks up all the sheaves?  They thought this would be the perfect job for me.
From here it will be loaded onto a wagon and brought to Heritage Park to be thrashed this weekend, at the Chilliwack Fair.  Hope to see you there! 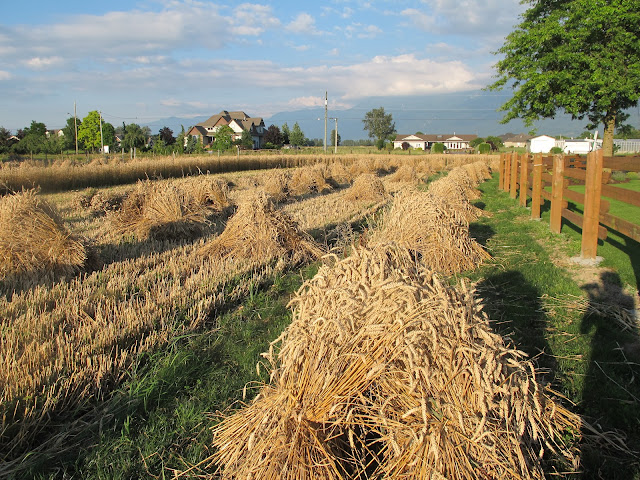 If you have nothing to do today...take a drive by..
and remember this could be a perfect photo op.
But make sure you come and say hi!
You never know what will be coming out of my kitchen.
Help keep B.C.'s  Heritage Alive!