Can't You Smell Me? 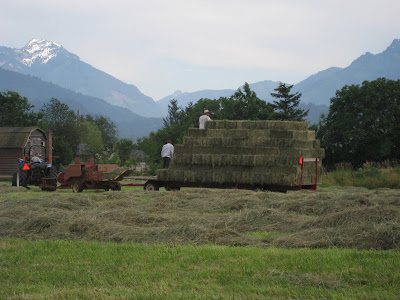 I noticed the rain clouds moving in quickly this afternoon.
The farmers were making hay as fast as they could.
On one side of our land....was a typical scene....
Tractor, baler, and hay wagon.
That's what I was used to. 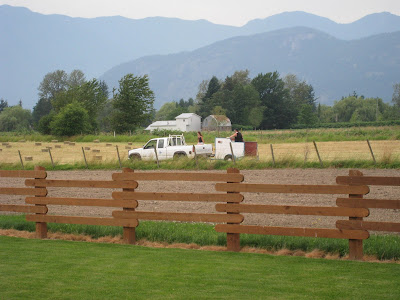 But on the other side, was a pick-up truck pulling a small
cart, or was it a chariot?
I have no clue and they were flying down the field.
You'll notice a gal sitting nicely on the edge of the truck.
She had no intentions of helping out.
But one by one, they loaded the chariot.

Meanwhile I was enjoying the smells of the freshly cut hay.
This reminded me of a time, when my daughter crossed the border.
The border officer asked her,
"Where are you from?"

"Could you please speak clearer,"

And she blurted out,
"Can't you smell me?"

Of course she was referring to the fact that she lived out in the
farming community of Chilliwack, which evidently is known
for it's all surround smells at different seasons in the year.
The officer smiled and waved her on.

So imagine travelling with her for one week.
Our journey will begin....
See you next week.