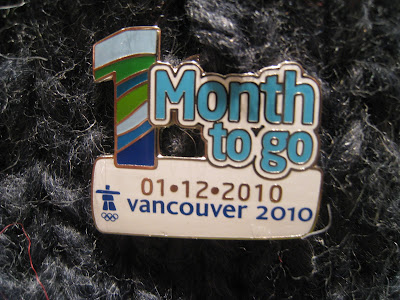 I've been knitting up a storm.
Would you believe that after yesterday's hiccup...
I thought I best locate where I put my tickets...
I ran around the house frantically last night,
wondering where I had safely put them...
I found them later this morning...not in the usual spot.

I went to a party the other night and asked about purchasing
Olympic Badges...the kind that you can sew onto your clothes.
I realized very quickly...that was a NO! NO!
So then I thought I'd take the logo off some sweaters,
and sew it on to my new toque....
which would match my mittens.

Again, I was warned, that was a NO! NO!
Anyways, I finally made a trip down town...
to the Hudson Bay, our Olympic carriers,
only to find pins galore...
I was educated about trading pins.
Anyways I found exactly what I was looking for. 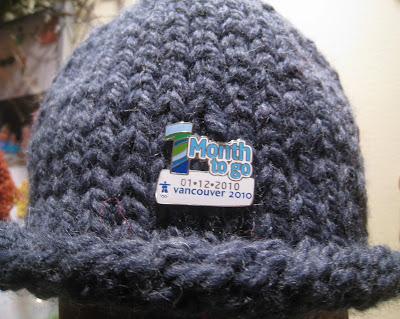 What are you doing to catch the excitement?
Today's paper had the emotional story of Darlene Poole,
bearing an Olympic Torch with her husband's image.
She lost her husband to pancreatic cancer in October,
hours after the torch was lit in Greece.
Poole is known as the "Father of Vancouver's Winter Olympics."
Anyways, I'm off on my walk counting the days!