Remember, I told you I'd explain why I am fascinated with the Olympics?
First, let me share with you the symbolic meaning of the rings.

"The five rings represent the continents of the Americas (North and South), Australia, Europe, Africa, and Asia. The rings are interlaced to show the coming together or meeting of the continents at the Olympics. The emblem chosen to illustrate and represent the world Congress of 1914, five intertwined rings in different colours - blue, yellow, black, green, red - are placed on the white field of the paper. These five rings represent the five parts of the world which now are won over to Olympism and willing to accept healthy competition."
They were first introduced at the 1920 Summer Olympics in Belgium. 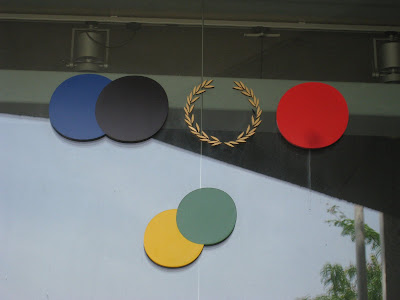 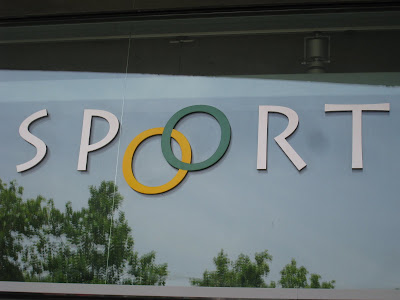 Various designs and creations of the Olympic rings.
~~~~~~~~~~
It was way back in elementary days,
when I always won the overall award for Sports Day!
I had no idea why I was winning.
There was no such thing as practicing.
I just went out and gave it my best shot.
As I grew older, gaining the edge on competition, became my priority.
Competing for me, meant striving to thrive amongst my five brothers.
They brought the best out of me as I skillfully worked my way
through playing football, basketball, and baseball.
They were my team and they were my competitors. 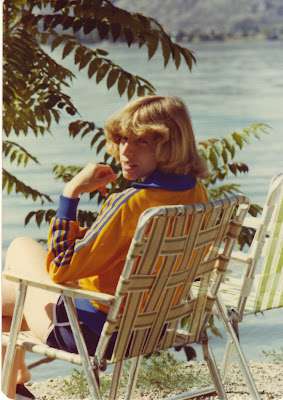 I always loved to sport my royal blue Adidas track jacket,
with the bright blue stripes..(1979)
Do any of you remember those colors?
I wish I would of kept it. 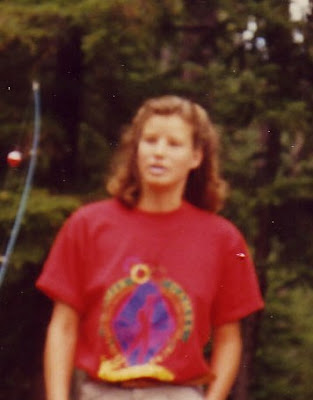 About 10 years later, I met this gal camping up at Manning Park.
She fascinated me, no, I mean her shirt fascinated me...
Her shirt had the Olympic Rings!
To make a long story short,
I inherited her shirt as a thankful gesture for our hospitality.
I was so proud to wear an Olympic Shirt.
Why didn't I keep it?

Few years back, when Whistler was chosen to host the Olympic Games,
I was on a roll. I would become a spectator.

I entered the lottery two times and to my despair,
my name was not chosen.
I whined and lamented....

During our travels in Europe I had the privilege of visiting the
Olympic Stadium at Athens which hosted the Summer Olympics in 2004. 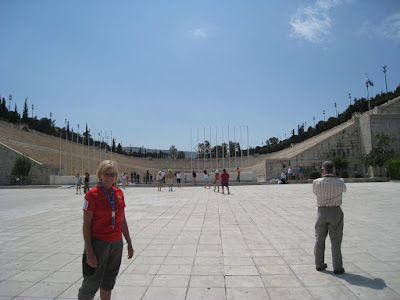 Here we are at the Panathinion Stadium. It was constructed in 1896 for the first modern Olympiad, birthplace of the Olympic Games. Once again, Athens hosted the Summer Olympics of year 2004. It is the only major stadium in the world built fully of white marble.
( Double click and you will see the large Olympic logo in the back.) 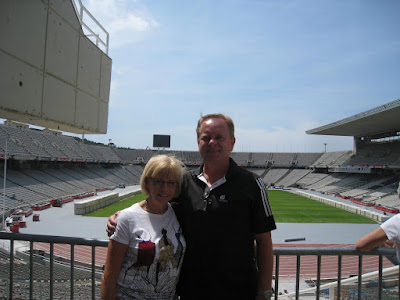 Then we were whisked off to Barcelona where we made, yet,
another tour around the Barcelona Olympic Stadium (1992) 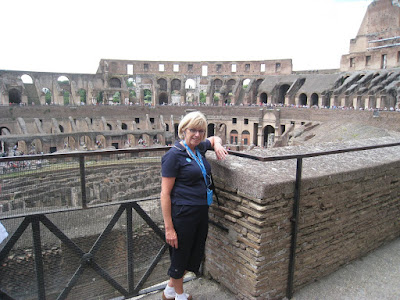 Then, off to Rome.
I could not resist, departing from my group,
leaving them in the dust,
as I sprinted one lap around the Roman Coliseum. (80AD)
Some things you just need to do and Experience!!
This truly gave me a heightened experience to my Olympic spirit.

Have you caught the Olympic Spirit?

Come back next Monday and I'll share with you the rivalry over Olympic tickets.