Another Season of Family Celebrations.
It's fun to see them all come together.
This year, we were all together, 35 of us, except for three cousins.
It was one amazing time!

My parents have past away, over 10 years ago.
It was always my biggest fear,
that we would not be able to keep our family in tact.
But throughout the years, we have worked hard,
and continued to initiate events around the celebrative seasons.

Mom & Dad,
You would be so proud to see your wonderful family.
We have continued to share life and make new memories. 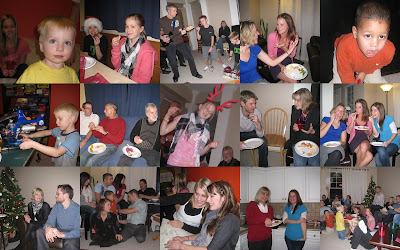 Mom, no more turkey, we switched to appetizers.
Loren, is upset to this day, that there
was never enough gravy...but he survived.

We didn't play old fashioned games. We used technology.
Who could text the fastest?
Who had the most cell phones in one family?

We all shared about our lives over the past years,
realizing that some had serious health issues.
Sometimes we wished you parents were there still praying for us.
(we know you are...but we still miss your presence)

Even the wee little ones were allowed to play hockey in the house.
They even wrestled just like you would of allowed us.
You put up with so many things.
Many times you told us to go and play in the barn.

But then Orlando began to turn the music on quite loud...and
began mimicking to the beat...(they called it Christian music)
Some people were even moving....dancing????
I don't know what You and Dad would of thought of that.
I just remembered that you did not like the music
that Vic brought back from URBANA 40 years ago.
The record of Jonathon & Charles, (similar to Simon and Garfunkle)
Dad, you were not always pleased with our music,
but you always accepted us for our ideas as we grew up,
and so we're trying now to do the same thing
as we watch the next generation pull together.

Sometimes we just need to bite our tongues. 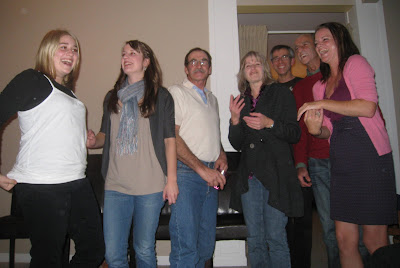 Talk about biting our tongues...
But, then came the worst....
The family began to laugh outrageously.
Your son, Dave got everyone going, even the young ones.
We know that you and Dad loved to joke.
But I wonder what they were laughing about?
It was about the Famous Schmidt Tradition. 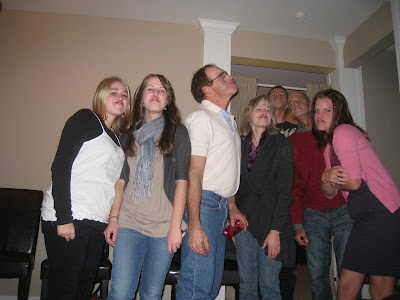 Who can touch their nose with their tongue?

And there you have it...
We have carried on...
I think you'd be smiling, thinking...."Was fur Dummheit gibts jetz?"
Translated...What kind of stupidity is this? 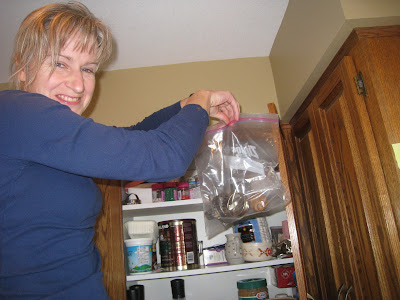 Mom, we even found your old cookie cutter, in Sheryl's Kitchen.
We decided to start a new tradition....baking together. 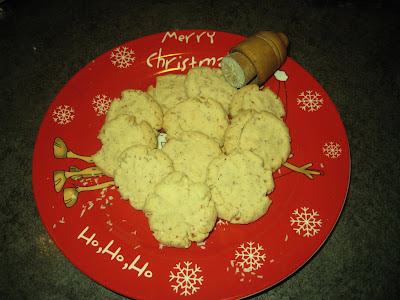 And we made a special plate of cookies, with that special stamp...
not exactly like the ones you used to make,
but we knew you wouldn't mind. 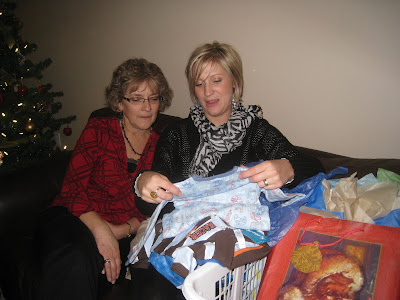 Last but not least,
You would of been so proud of us, that we chose not
to spend money on gifts for ourselves,
but rather brought gifts for the new baby to be born.
Emily and Andrew will be having their first child.
Vic is actually going to be a Grandpa.
You, would now have 4 great grandchildren.
Levi, Cameron, Silas.
Thank-you Mom & Dad for giving life to us.
You gave us a rich heritage and we want to
carry the torch to the next generation.

Thank-you Orlando and Viv for being such tremendous hosts.
The Christmas Spirit was truly present.

I think that today I will sign off on behalf of the
Schmidt House.