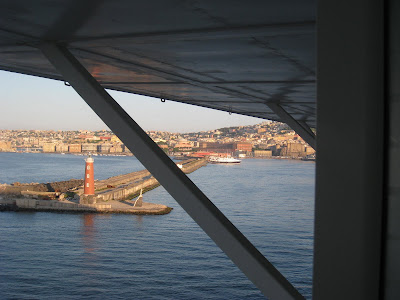 And yet we are greeted by another beautiful sunny morning.
We have arrived into the Port of Naples.
Naples is the third largest city in Italy, with a population over 1.5 million.
The Bay of Naples is Italy's second most important port.

If you ask me what was my highlight in a nugget?
Let me share this moment with you. 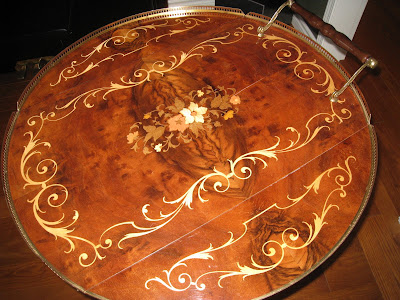 Do you see this tea cart?
Twenty five years ago, my parents went to Europe and brought back 5 tea carts with inlaid wood, one for each family member. This is my own tea cart which I now cherish more than ever.
I found a quaint shop in Pompeii and snooped around long enough to know that each cart today is worth 375 Euros which would be the equivalent of $550. Imagine the cost to him 25 years ago.
I now treasure and value this, knowing the work and effort my father made to have these tea carts shipped home to Canada. This will be my best souvenir ever. 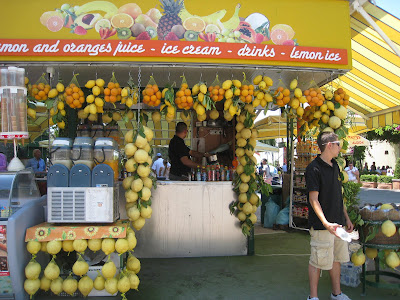 The streets are lined with cars and fruit shops. One of my my favorite drinks was a fresh lemonade smoothie. These were offered at all street corners. You could not leave Naples with out the fresh taste of lemons in your mouth. 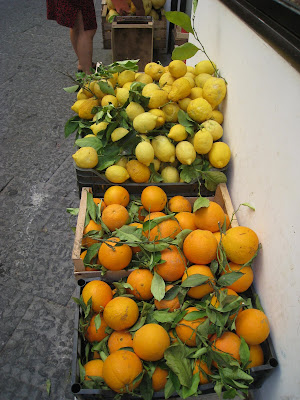 Don't you feel like picking one out of the box and making home-made lemonade? 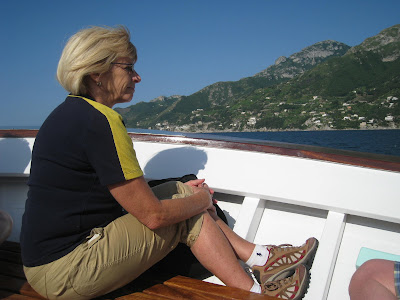 That's why we chose to see the coastline via motorboat.
Today we are going to take a relaxing motorboat ride along the Amalfi Coast, the most famous coast of all Italy.
As always, I would work my way through, finding my seat toward the front of the boat. Once again we are able to view the unforgettable Dolomitic cliffs, which tower out of the sea and have been sculpted by nature into fantastic shapes. 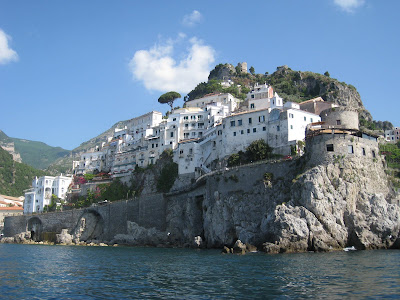 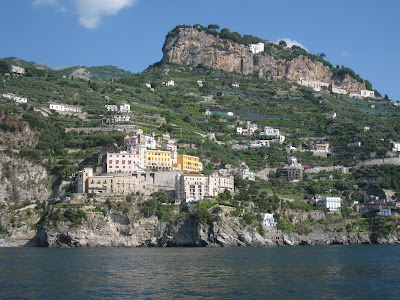 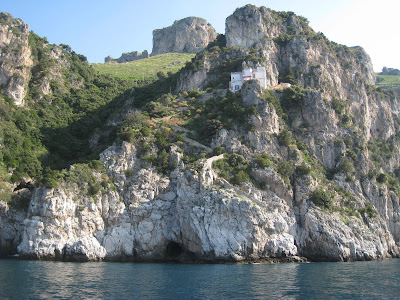 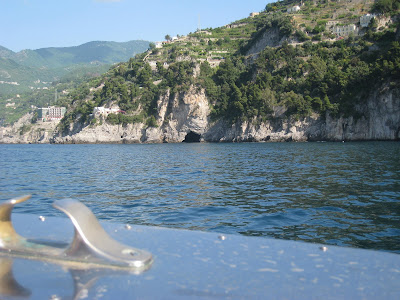 "Oh!, so you see that opening in front of us, against the rock formation. How many of us dare to go in there?" announced our cute young Italian tour guide. 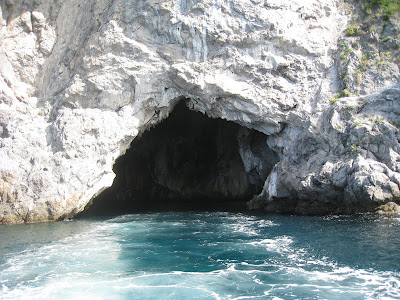 Here we go right into the cave and saw remarkable formations. There is always that bit of adventure, but we all survived. 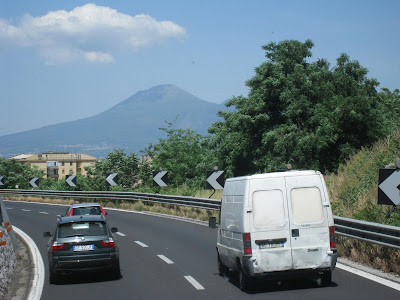 Next she shipped us off onto a bus and away we sped. In front of us we could see Mount Vesuvius. Here we were are going to learn how life was many years ago. This is the only active volcano on the mainland of Europe. 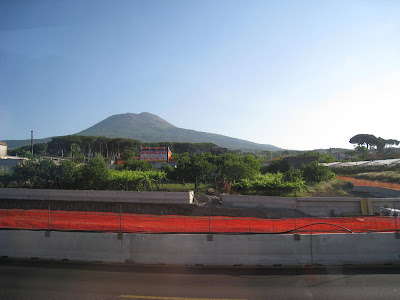 Again, in the distance you can see Mt. Vesuvius which erupted in August of 79 A.D. The surrounding country side was buried under a hurricane of ash, cinder and eruptive material, while rivers of lava mixed with mud flowed down it's sides. It took the area residents by surprise, many of whom were killed as they tried to escape to safety.

Pompeii had been a prosperous place with more than 20,000 inhabitants. After this horrific event, Pompeii remained buried under a layer of ash more than six meters deep. It was more than two centuries ago, that the moment of light became evident, as they began to make something of this tragedy. 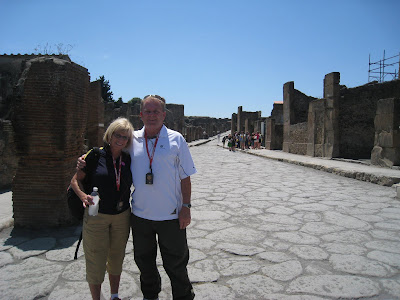 You can journey along side us as we quickly make our way through the remains of public buildings, streets, temples, shops, theaters and public baths. 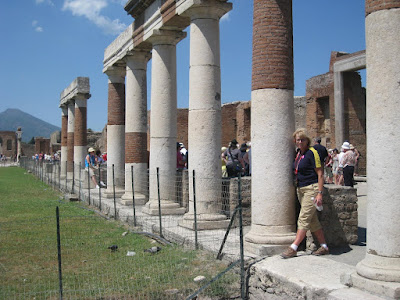 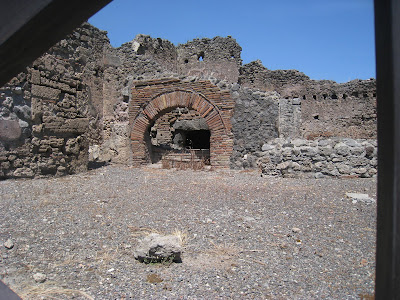 Modestum's Bakery. They found 81 carbonized loaves of bread at this site 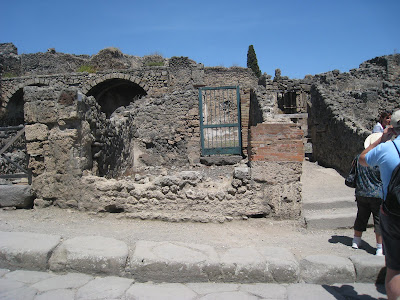 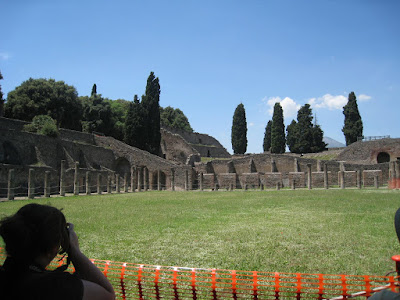 Recreational field for the gladiators and other sporting events. 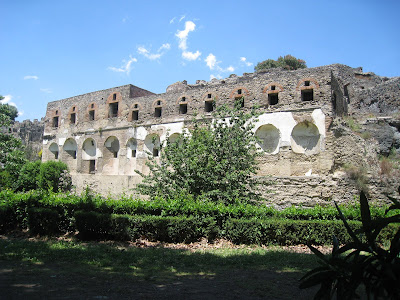 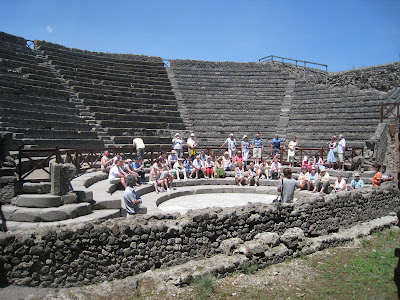 The Grand Theater which could hold up to 5000 spectators. 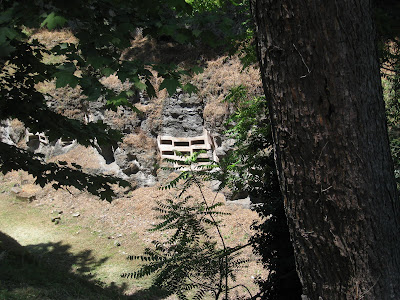 Those little openings in the cement combs are burial places. 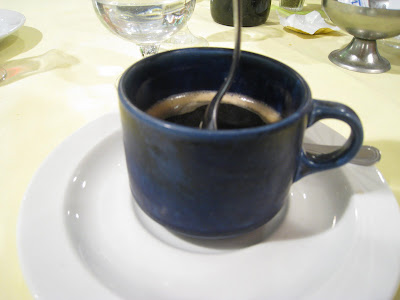 Are you still with me? Are we all standing up straight? Well it's been a long 10 hour journey, but there was lots to see and that's why they drink strong coffee in Europe.