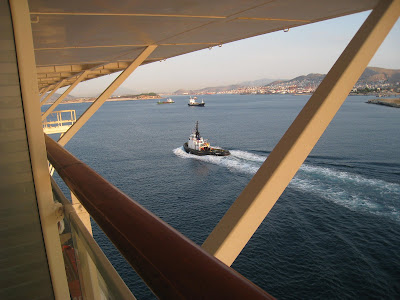 Early in the morning, you would catch me peering around the curtains and looking out on my balcony. It was always exciting to see the geographical features of each port.
Our first morning on board found ourselves hustling early to make sure we were ready for our first excursion. Most excursions started at 7-8 am each morning, so that meant you had to wake up to an alarm, get ready, eat breakfast and get down to your destination deck!
Did you hear me say my alarm was set for 6:00 am?

Throughout history, Athens has been one of the most important and influential cities in the western world. Often it has been referred to as the 70 year Golden Age. It was during this period, 500 - 300 BC, that great strives were made in architecture, literature, math, science, philosophy and medicine. 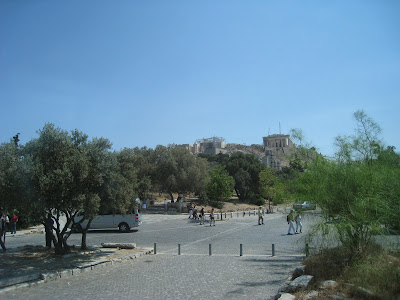 Our first glimpse of the architectural masterpiece, the Acropolis. The Acropolis is known as one of the great wonders of the world. It consists of various buildings. Through out history the Acropolis served a s a military fortress. It is about a 5 minute climb and 150 steps to the top of this famous hill. The term acropolis means upper city and is known as a place of refuge. 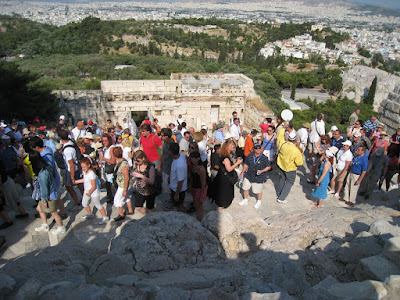 I had envisioned starting from the bottom and jogging up this historic site.
Ooops! Wrong Again.. There were line-ups and the path was jammed with tourists.
We actually got lost at one time....but stayed tuned to our head phones and finally realized we were off the beaten track. That's not unusual for me. 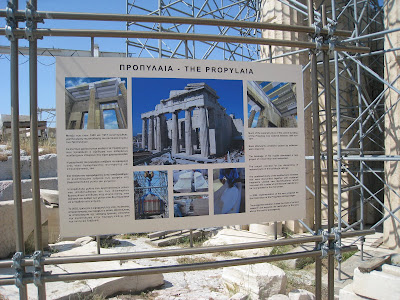 After climbing the steps, you are at the entrance of the Propylaea which serves as the gateway to the entrance into the Acropolis which was controlled by the Propylaea. Again these building are all under a restoration and reconstruction program. 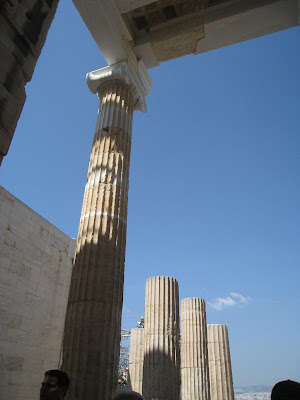 It's mighty pillars rising to the sky. 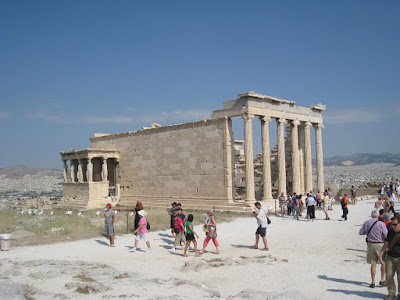 The Erechthiom is a Greek Temple and associated with the most ancient and holy relics. 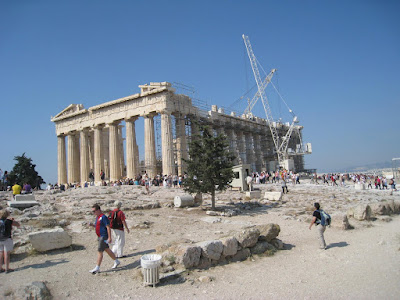 The Parthenon served as monuments of the cultural and political achievements of the Athenians. 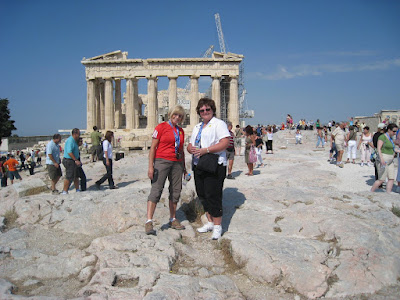 We thought we best represented and reflected our own culture as we posed in the hot sun.
We eventually caught up with the group and decided not to miss our next destination, which meant in plane English words, that our ship would not wait for us!!!! 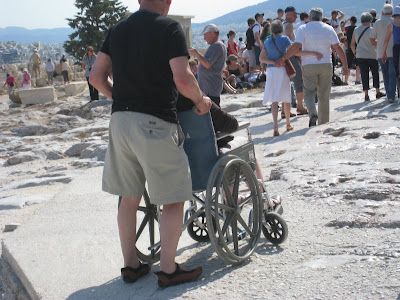 When we reached the top, I was amazed at seeing someone pushing a wheel chair, while all tourist information stated that the Acropolis is not wheel chair accessible.
"Where there is a will, there is a way." 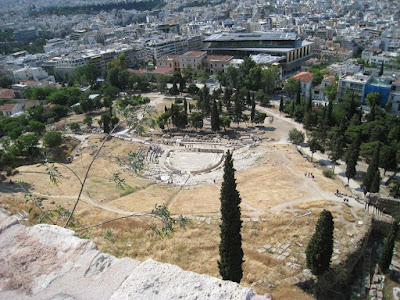 Way in the distance you see the Odeon Of Herold Atticus amphitheater which was built in the second century AD. It has been reconstructed and is used to host the Athens summer festival performances. 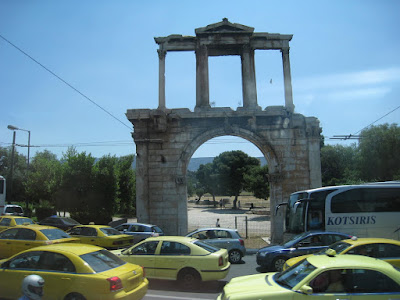 Later in the afternoon we drove past the Hadrians' s Arch which was constructed in 131 AD, separating the old and the new cities of Athens. 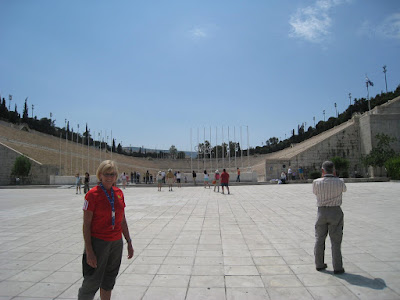 Here we are at the Panathinion Stadium. It was constructed in 1896 for the first modern Olympiad, birthplace of the Olympic Games. Once again, Athens hosted the Summer Olympics of year 2004. It is the only major stadium in the world built fully of white marble from Mount Penteli. Double click and you will see the large Olympic logo in the back. 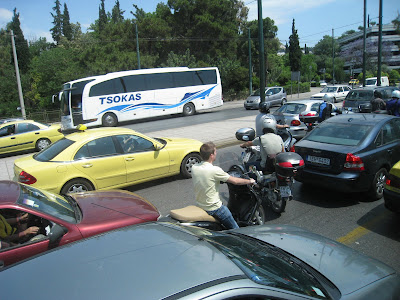 Despite it's vast history, Athens of the 20th Century is a bustling modern city with overcrowded streets, traffic jams, pollutions and characterless modern cement buildings. The Athens of today is home to 4.5 million people. The street traffic was absolutely chaotic. Motorbikes were weaving in and out of traffic. Way beyond my comprehension. This was not my most favorite place, although the younger generation seems to love it...
What does that tell you about generations? Some like order and some don't!

But next, let's take a look at Santorini, also a Greek Island...but we loved the culture.