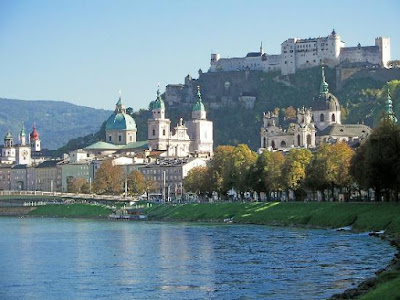 I have finally found some time to sort through photos and reflect about my European travels this past spring. Over the next few weeks, I would like to transport you into my world of travels and experiences. Get Ready. Here we Go! Are you all buckled up?

It's always been a dream to listen and experience a first class concert in Europe.
We first visited family in Southern Germany, and then proceeded to travel alone to Salzburg. I had an agenda..
A Live Concert!
Mozart's Birth House!
The Sound of Music Tour! 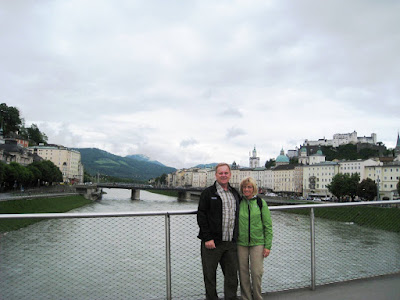 Far in the distance you can see the Hohensalzburg Fortress. In this place we were going to feel the magic of music. A small cable car carried us to the top of the fortress.
The Fortress Hohensalzburg is the landmark of the city of Salzburg. With a length of 250m and a width of 150m, the Fortress Hohensalzburg is the biggest still maintaining fortress in Central Europe. The fortress is located on a hill just before Salzburg. The hill is called Festungsberg.
The beginning of construction started in 1077. It was completed in between the 12-13th Century.

Salzburg is a small bustling city with a population of about 150,000 but in summer it hosts the Salzburg Festival which hosts over 2 million young musicians and tourists.
That's the place to be if you love music. I had always heard my music teachers talking about going to Salzburg during the summer times. Now I know why they went.
I never believed that I would drag my husband to a place like this.
He has always championed my interest in music. 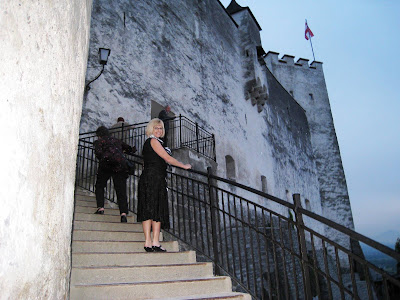 Slowly and carefully we made our way up the narrow winding steps. When we arrived at the top step, he said, "Did you know that I counted 144 steps?" Since when does he count steps. Obviously he had been looking for an elevator.
I don't think they had them way back in the 12 Century. 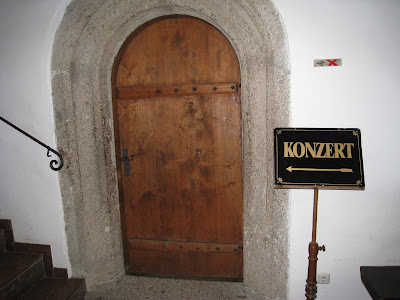 We found our way to the Furstenzimmer. (Prince's Chamber)
There we found the marked door. What was behind those doors?
I was in another world...wondering in awe... 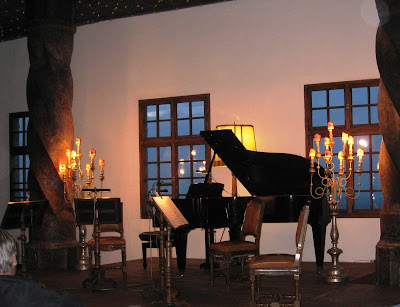 There it was. A grand piano just like I imagined. Imagine taking yourself back into another era and listening to Mozart play this piano.
What an enchanting hour. And there we were entertained by some of Europe's finest musicians.
We listened to "Das Kaiser Quartett" by J. Haydn, "Klavierkonzert D-Dur" by J. Haydn, and last but not least, "Eine Kleine Nachtmusik" by W.A. Mozart. (1756-1791)

When a row of lighted windows can be seen as evenng falls over Salzburg's world-famous fortress, you know that a concert is being performed in the Prince's Chamber. 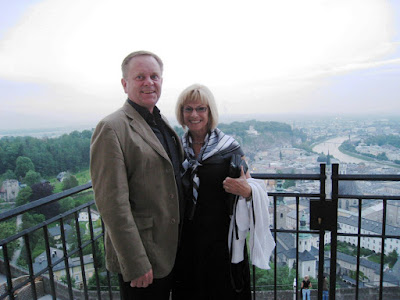 "Music should go through you, leave some of itself inside you, and take some of it with you when it leaves. " ~ Henry Threadgill. This was truly experienced by both of us. 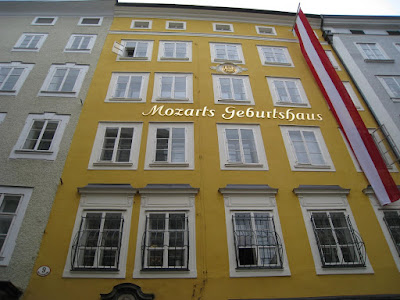 The following day we took the afternoon to explore and learn more about the history of W.A. Mozart, one of the world's finest musicians and composers. We visited his birthhouse. Just imagine tracing the footsteps of a classical composer who brought soothing hours of music to generations and generations. A young boy of five years of age composing and performing. Unbelievable! A musical prodigy!
A short life, but well lived, not without struggles and challenges. Thirty five years old.
He left the world in awe! Januay 27, 1756 - December 5, 1791. 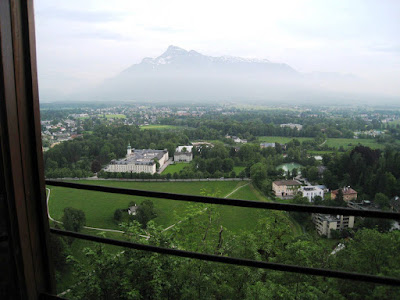 Prior to the concert, we dined in an elegant atmosphere in the Fortress Dining Room.
This is the view from our window..A mountain in the distance...Everyone's eyes were focused.
Do any of you recognize it or know what it represents?
More to follow. Stay posted!