I want to highlight three individuals who have applied this approach.
Jacob Doerksen has been recruited as one of the top players in Canada.
But Jacob does not only play the game.
He cares about people.

Take a look at this video clip.
CTV had an interview with Jacob.
This man has chosen friendship with Trevor Klassen over stardom.

I also want to honor another young man, Jon Schmidt.
Inspite of his challenges with knee injuries, he too,
stands out in his team, always analyzing,
strategizing, coaching, and encouraging the team.
Jon is an icon to many young athletes.
He cares deeply about his teammates.
He's the kind of guy who knows how to "give his mates a cup of water." 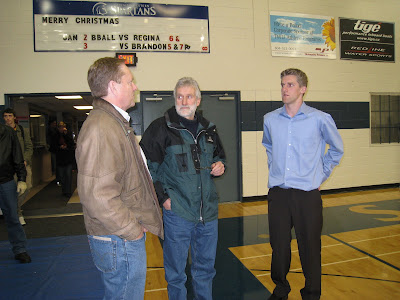 You can always catch Vic discussing with his son,
the strategies of each game, prior to the countdown.

A few months back, Vic was the highest bidder for a ticket
to join Coach Allen and the TWU Spartans, on the bench,
during their rival game against U of VIC. 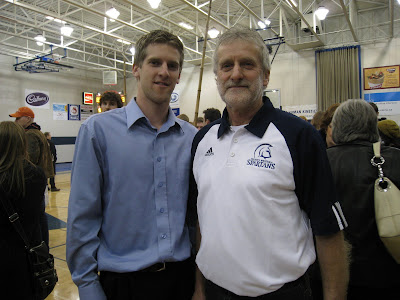 As we drove to the game,
I noticed he was sporting a brand new TWU Spartan shirt,
that he proudly wore:
a gift from his family for his most recent milestone birthday.
One of his dreams was becoming a reality.

As Vic entered the gym, he proceeded to the teams locker room,
while we waited proudly, for him to step out, with the team.
And there he was.....
And we all applauded him!
I noticed how he walked alongside,
giving encouraging comments to the team players.
I saw Coach Allen (TWU Coach) walk up to Vic and exchange welcoming words.
Vic then proceeded to walk over the court to the opposing team,
and shake the hands of Coach BrianCheng. (Coach of Victoria Vikings)
He was smiling and grinning from ear to ear.
We all cheered along while TWU squeaked by with a winning score.
TWU Spartans 87-83.

Vic also takes pride in his farming.
You will find his advertisements in the Holstein Journals.
He does not just advertise his purebred genetics
but he promotes his love for his Family and the Game.

The background of his advertisement page is a basketball court,
with his son Jon shooting at the hoop.
His captions?
"Scoring beyond the Arc"
"Rookies in Red"
"Starters on our Genetic Team" 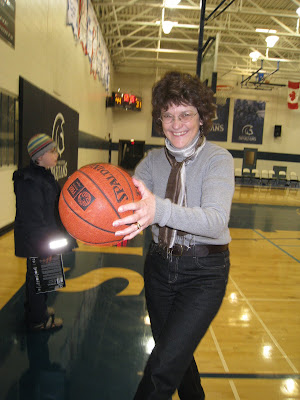 His wonderful wife and companion, Elsie would never miss a game. 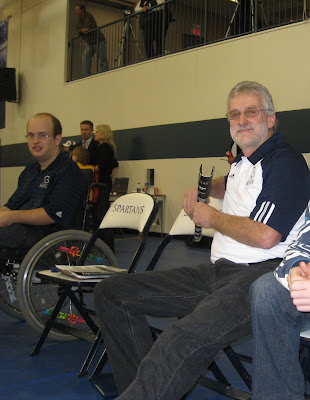 Vic, you've always modeled the Complete Champion Approach.
You already have a winning Team.
(You'll notice Trevor sitting next to Vic)
~~~~~~~~~~~~~
So are we off to the Nationals?
Those decisions will be decided this weekend.
TWU is fighting again,
against the Victoria Vikings for a position in the Western finals.
Guess where I'll be....