The Family that Cooks Together

They may not all want the family farm. Many times I don't blame them.
The last post caused quite a reaction in our family.
There were tears of laughter as each of them took time to add their two cents worth.
My son gave me the permission to post his strong reactions. Have a good laugh and sense of humor especially those of you who come from a farming background.
"I started listing off the reasons I didn't choose farming - not because I didn't think it was a good career; rather I look up to mom & dad - for they've worked harder, than anyone else I know. When everyone is tucked into their beds having hot cocoa, mom & dad are out shoveling snow, patching burst pipes, calling the electrician, plowing Bustin Road themselves so the milk-truck can get through, hiring helpers who complain they're sick, tired, drunk, or need higher pay to shovel the shit the farm hands out. There are fences to fix, cows to chase, generators to hook-up, machinery to fix, machinery to maintain, catching big, heavy chickens at midnight, farm upgrades, building new infrastructure to stay in competition with the other farmers that are doing everything I've already mentioned, plus more. There's the need to be able to predict health issues, before they strike the chickens dead; there's the ability to pick-up dead chickens every day, and interpret how each one died. If its upside-down, that means one thing; if they're side-ways, that's another; if they're on their tummies, that's another. There's so many ways to die, and that all tells mom and dad something about what to expect tomorrow. If dad can't be his own vet, he has to hire an expensive vet which means no profits this batch. Then there's balancing the weather inside with the turbulent Chilliwack weather.

What about the economy? Free-trade agreements being made worldwide? Recessions? High grain prices? High gas prices. Oh, did I forget to mention the stress of having a mortgage on a house; let alone a lifetime mortgage on a farm?

Think you're up for farming? Go on dad's emergency call-list. The dozen times dad's put me on it, when they've gone away - even when I've been the last one on his list for the alarm company to call, I've almost every-time got called out to the barn at 2AM, 5AM, or in the middle of playing Rook with my wife, Lora on a Sunday afternoon. And if I got called, I know the 5 hired workers dad had, the alarm company called before me, all either ignored their phones when they saw the farm call, or were too drunk, or too unreliable to answer an emergency cellphone.

Thank you mom and dad, for taking care of the farm, when we've all abandoned it, but still been able to hold onto the very special lifestyle it does offer, when the farm is taking a break from calling you. Thanks for all your hard work in the face of adversity. Thank you for never expecting me to take-over the farm; or quickly realizing that I had other dreams to pursue."

Just as a side note....I need to tell you that all three children have university degrees and followed their professional dreams. Discussing the pros and cons of careers can be debated for hours and hours on many a Sunday afternoon. 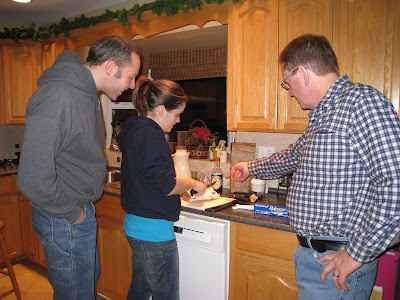 But never the less, let's quit complaining about the family farm, and talk about contributing to the nutrition of an active family. Look at those adults prepare, Fishy in a Pocket.
You can find this recipe on Mennonite Girls Can Cook Blog.
If you want a fun filled evening, invite your adult children to cook in YOUR kitchen.
Remember it only gets better.