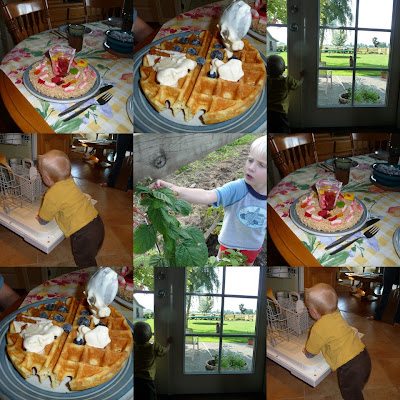 To all my Friends who have a child/grandchild going to school today.
I had this posted in my kitchen 25 years ago as a tribute to my young son.
Now, 31 years later, I make a tribute to his own son, my grandson.
He's such a nice little fellar......
We celebrated with waffles and rice krispies squares.
Meanwhile someone else is itching to partake.

"My young son starts to school today...It's going to be sort of strange and new to him for awhile, and I wish you would sort of treat him gently. You see, up to now he's been king of the roost...He's been boss of the backyard...His mother has always been near to soothe his wounds and repair his feelings.
But now things are going to be different.

This morning he's going to walk down the front steps, wave his hand, and start out on the great adventure...It is and adventure that might take him across continents, across oceans...It's an adventure that will probably include wars and tragedy and sorrow...To live his life in the world he will have to live in, will require faith and love and courage.

In school, World, teach him it is far more honorable to fail that to cheat...Teach him to have faith in his own idea, even if everyone says they are wrong...Teach him to be gentle with gentle people and tough with tough people.
Try to give my son the strength not to follow the crowd when everyone is getting on the bandwagon...Teach him to listen to all men - but teach him also to filter all he hears on a screen of truth and take just the good that siphons through.
Teach him, if you can, how to laugh when he's sad...Teach him there is no shame in tears...Teach him there can be glory in failure and despair in success.

Treat him gently, World, if you can, but don't coddle him...Because only the test of fire makes fine steel...Let him have the courage to be impatient...Let him have the patience to be brave.
Let him be no other man's man...Teach him always to have sublime faith in himself.
Because then he will always have sublime faith in mankind.
This is quite an order, World, but see what you can do...
He's such a nice little fellow, my son!"
Dan Valentine
I thought I signed off...but I will keep you posted for the special events.
Too true to my heart....
I love you all.