There is nothing greater than being an Oma! I fought it with tooth and nail, but No, I'm not an Oma with a grey bun, a long dress draped around my ankles and an apron tied around my waist all day. I'm a pure Canadian born Oma and I'm so proud of it.
On one of our flights overseas my grandson, Levi, (4 years old) turned around in his seat and said, in an expressive voice,
"OPA!" Well, the whole plane turned around and took their wine glasses and toasted, "OPA" Apparently that's the Greek way of toasting and our plane was filled with Greek families.

It was Thanksgiving weekend and suddenly after the meal, Levi says, "Oma Look!" I jumped up and he pointed at something...... 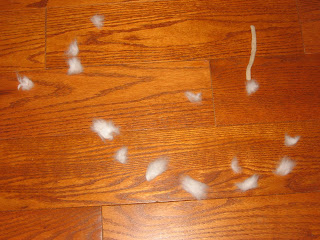 What on earth is that? "Those are clouds, Oma!" He had found some cotton baton and ripped it apart to make clouds. And what's that string? "That's a worm, Oma"
How does all of this connect? I can't imagine, but it's so great to see their minds explore.

Later in the afternoon while the family was sitting around, I heard some familiar noises in the dining room..I peeked around the corner. Here was Opa & Levi playing "Khnipsbrat" He was so proud of scoring and constantly cheering himself on..in fact when he scored into the hole, he said that he was like "Steve Nash"
What's the resemblance, I don't get it...but meanwhile they were having so much fun. 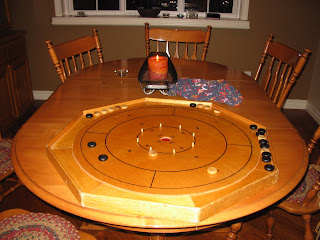 Then came the overnighter, Could he stay at Oma's for night? He was wondering if we could change our plans to accommodate him?
We would do any thing go have his company. We made the usual popcorn in the special cups. (My kids keep asking why they didn't have those cups when they were small) 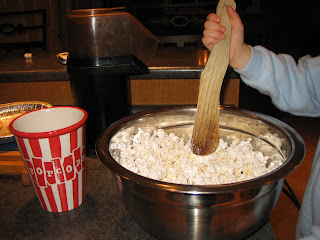 And now it's quiet time with Pooh's Heffalump Disney video. He's totally aware that the magical hour of bedtime is counting down. I prayed with him and tucked him into bed and within a few minutes, I heard the soft pitter patter of footsteps in my office.
"Oma, my heart hertz so for my Mommy."
There's absolutely nothing more beautiful than to hear his child like voice express himself.
I wish I could just put him on HOLD.

The morning didn't seem to appear as sunny as usual. I sensed that he was not well. He tried so hard to help me my make double decker biscuits but he had no energy.
Later we walked outside to help Opa in the shop, and then he said,
"Opa, I can't jump on the trampoline today. I have no N N Nergy"
"Opa, could we go and see the chickens another day when I have N N Nergy?"
What does a little 4 year old know about energy? Just another day celebrating "The Love of my Life." Savor and enjoy those precious moment's, they escape too quickly.